WOMEN TAKE ON TOURISM SME: PROMOTING IT THE CENTRAL WAY 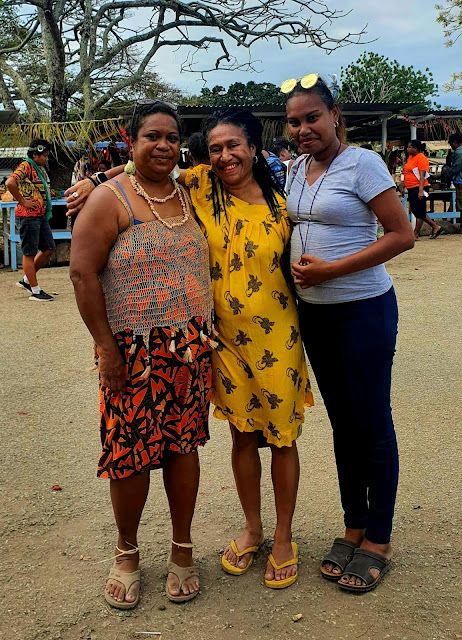 Traditional Arts & Crafts, dances, songs, costumes, food and scenic adventures etc. are some of the many things community based tourism can offer for local people in Papua New Guinea.

In Papua New Guinea's Central province, it's no exception. It's a massive untapped industry that can involve and transform thousands of people that lives along the rural peripheries of the Nations Capital Port Moresby.

After a month of getting hospital treatments in Port Moresby, I took a quite bumpy ride along the Hiritano highway into Kairuku where an arts & craft mini show was being held.

Just passed Brown river, the newly sealed stretch of road led us through as I gazed in amazement at the Doa rubber tree plantation. A few roadside markets is no let down for someone looking for cheaper and freshly harvested garden produce.

We arrived at Agevairu, a small shopping hub hosting the Rorobana station where local commuters stop by before continuing their journey. Situated at the junction of a major ring road leading into Hisiu and other coastal villages, Agevairu is somewhat a mini town with a fuel station, a shop, several tuckershops and roadside markets.

This is the fifth time, Mavis Maino has organized a mini arts and craft show for local communities along the Hiritano corridor.

As alluded by Mavis, she is leading a group of women whose interests lies in promoting arts and crafts in Kairuku and providing a platform for Women in Business through their small SME markets.

'I would like to say thankyou to Anna Pinu, who is the owner of the Rorobana station. She has been a great supporter since we started this craft market here in 2017,' says Mavis.

Also in attendance was wife of Central Governor Robert Agarobe who is a keen advocate for tourism and SME empowerment in the province.

Miku Agarobe runs Destinations Sogeri in the Koiari LLG of Kairuku-Hiri Central province. Based out of the Kokoda Trail Hotel in Sogeri, Miku has been hosting several leisure and tourism promotions activities since 2019.

Alot of people come to Port Moresby, they fly over Central and go to other parts of the country looking for tourism destinations.

'Its time now we get ourselves organized, revive our cultures, customs and traditions and promote ourselves actively and aggressively to show PNG and the global community that we have something unique in Central province,' says Miku.

Miku also extended an invitation to the  Kairuku women to be part of the 1st Sogeri Pineapple Festival to be hosted by the Koiari people at Sogeri this November.

Anyway, I stayed there for two hours and took the trip back. Hoping to take a trip or two anytime I get the luck.

I got this to say;

Central province has a vast history in early colonial settlements. War memorials and remnants are predominantly scattered all over the province. Early Christian missionaries have established strong following in the entire coastal and inland regions of the province and have built monumental church buildings and infrastructures throughout that still stands to this day.

Its rich fertile land grows abundance of organic food crops which can supply Port Moresby and other towns in PNG. Better road access and provision of basic services to remote areas will greatly unearth the massive potential for mass production and supply and putting money back into the local economy.

It's serene coastline and breathtaking waves provides a perfect destination for sports tourism and fishing expeditions.

Dirt biking, trekking or simply going off road wont be disappointing in the Central province. Its surely a million different journey. The rugged terrains over the Owen Stanley range holds an adventurous journey for those taking on the challenge to experience the hardships during the Battle of Kokoda.

I hope to return in November for the Pineapple festival and to see the growth of this amazing journey these women will take to empower not just other women but everyone to take tourism in Central province to new heights.