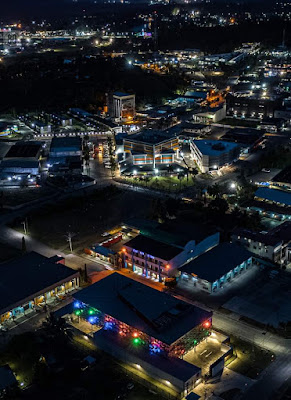 I grew up in Lae in the 1990s, a time when it was going through a transitional change as the industrial hub in Papua New Guinea.

Papindo had its first shop at Top town just next to PNGBC bank (now Leannes Bakery). Best Buy and Vele Rumana at Top Town was where you would find alot of people. There was no Foodmart, SVS was the old Capri and Melanesian hotel is where the swimming pool was packed with families on weekends.

We would spend weekends at the Esplanade (line Talis as it was known) and walked home in the afternoon back to our homes.

Papindo Eriku had just opened and we would spend an hour going up and down the escalator as it was the only shop that had this.

Prices of goods were not expensive. We race down the street to grab a cone of ice cream for just fifty toea,  a couple of snacks for a kina and so as a bottle of drink.

There was no hustle and bustle of vehicles and people. Not because the road was bad, but there weren't alot of people moving around doing nothing in town. Lae was the garden city in PNG and a thriving economy in itself.

It was a time when school finishes at 3pm, but some of us stayed back to play, study or practice for sports and church gatherings. There weren't alot of bullies in school, those who smoke or chew betelnut were a minority. Girls play among boys and elderly kids take responsibility to walk the younger ones home.

I remember kids staying at Bumayong, Tent City and Miles walking in groups to get on a bus. They play together to the bus stop and left. Those of us living in the city had to stand guard outside our friends home to return the 'dudu' touch. It wasn't a big deal when we were chased by their parents at odd hours in the night. We even bring our 'dudu' games to the church and inside the shops.

We would lined up outside offices and shops to collect used computer print out papers and empty cartons. Sometimes we would follow our friends to their homes and watch kids Kona   and movies. We weren't chased out by their parents because there was no easy pay issues back then.

The priest, nun and pastors were the most respected clergies at that time. Attending Sabbath classes and Sunday school was just as important as the Religious Education classes in schools. We sing at the top of our voices and dont feel ashamed to dress in traditional attires and dance in church processions.

The best days of school life are during sports carnivals, cultural says and an excursion outside of our school. We wore our school uniforms with pride.

Technology wasn't that advanced. Not alot of people owned computers, telephones were a vital source of communication and internet can only be afforded by bigger businesses. Cassette tapes were the only means of records we had. You can record a EMTV Wednesday or Sunday night movie on tape and replay it later for entertainment. Same as music records. FM radio was the only means of listening to new and old songs, news and other information.

The city council collects our garbage on time, streets were cleaned and our street roads dont have craters. Despite that, our major roads were deteriorating. No one dare to fix these roads.

Around 2001, 2002 and 2003 our roads started getting facelifts. An Australian government funded road upgrade program started sealing all our roads within the industrial areas. A new road link was cut through the Lae Old Airport connecting Lae Top Town to the Main Market towards the main wharf. More vehicles started using the roads and Lae was growing as the industrial hub with more businesses opening up.

Telecommunications started picking up its market. Bemobile started selling K500 (the cheapest) GSM phones and K250 sim cards, that could only be afforded by a few people. In 2007, Digicel launched in PNG providing the most cheapest and affordable phones to its customers. The rest is history now with almost everyone from the youngest to the oldest having access to the network.

By then, things have changed. Prices started going up, rentals skyrocketing and problems arising spurred by the influx of people into the city. Settlements sprouting all over the city, classrooms become overcrowded, clinics and health centers facing medical supply shortages and many other issues.

The old ANGAU Hospital building was infested with termites. Medical services could not operate normally, the government couldn't make funding in time to improve the facility and that placed alot of constraints on medical officers.

Crimes rates increased, there was about an estimated five major crimes committed in a week. Law and order issues started spiraling out of hand. Police plagued with no logistical support, an aging workforce and operating without funding support were toothless.

Twenty years on and Lae is still struggling to address all these issues. Funding has been a major setback for successive governments. From Bart Philemon, Loujaya Kouza and now John Rosso, Lae is slowly seeing light at the end of the tunnel.

Decades of misuse and mismanagement of our municipal service funding and DSIP fundings have brought Lae City to its knees.

Change is imminent under the Lae City Authority. John Rosso's vision to make a better Lae hinges on transparency, accountability and prudent management of assets and fundings.

Twenty plus years of misuse and negligence cannot be solved overnight, but with proper accountability and a committed workforce in the public service machinery could achieve a better future for our city and our children.

Let's help bring Lae back to its glory days.