EVIL PREVAILS WHEN GOOD MEN DO NOTHING 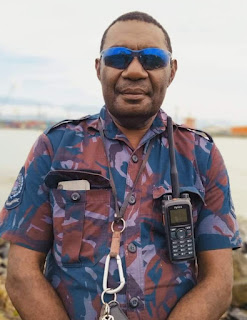 On New Year's Eve, I got on a police vehicle for the night operation in Lae City. Media personnel in Lae have been part of the police festive operations for the last five years and that has provided an in depth experience into how police men and women do their best to ensure citizens celebrate in peace and good order.

I joined the Romeo 14 police unit comprising reserve constables based at the Lae Market police station.

Anyway, we boarded the vehicle and do random check ups on streets to ensure citizens celebrate within the confines of their residence. A liquor ban and curfew was imposed to keep drunkards off the streets and not to cause disturbance on household celebrations.

Streets were all quiet with reports of drunkards  and stone throwing at main roads being broadcasted on the police radio. Drunkards were told to go home and those found with alcohol were cautioned and alcohol confiscated for breaching the liquor ban directives.

Just passed midnight, police personnel on foot patrol reported stone throwing from drunkards aimed at police officers. When back up arrived, the accused were swearing the police and boasting their attempt to stone the policemen.

Threats were issued without realizing they were surrounded by armed police officers on foot patrol.

The youths were rounded up and brought in for questioning awaiting formal charges to be laid in the morning. Their parents came in and the youths were released on conditions that the cell block was full.

What irritates me is the ignorance or tolerance by parents and elders to discipline young children consuming alcohol and using abusive words and causing public nuisance. In this case threatening the police right within the confines of their home. No one stopped them or even warn them about the consequences if caught by police.

Law and order is everyone's business. If you dont respect another person, you wont be respected as well. If you tolerate or defend your child while he/she is young, you will hire a lawyer to defend them in court when they get older. You wont be respected by your own children and that is a bad indication that he or she wont respect another elder in the community including the law.

We always complain about lawlessness, petty crimes, alcohol and drug abuse, cult groupings in schools, teenage pregnancies and many other social issues. We always blame the education system, the police, the government or even other people for our problems and struggles, but we fail to realise that we have ourselves to be blamed for negligence.

We dont stand up to take ownership of our issues. We blame the police for not attending to our complaints, we blame the police for brutality when we should be the ones disciplining our fellow friends and family members. When you condone your child swearing bad words, he or she will swear at someone and instigate a bigger problem for you.

Police and law enforcement officers are here for our protection and safety. Respect must be accorded in order to be earned.

In another incident in Port Moresby, an ambulance was stoned by drunkards. That very ambulance has saved so many lives attending to emergency and transporting pregnant mothers to the hospital. The next time, you are fighting for your life, this ambulance will take you to the hospital.

We also had reports of an ATM being damaged in an attempt to steal cash. Banks being robbed in Kerema and many others. When you dont respect and look after services, you will be ones looking for it when you needed the service.

Lae has been quiet all throughout the New Year's Eve without major incidents being reported apart from drunk and disorderly behaviors. Credit must be given to law abiding citizens in the city for taking the initiative and showing true leadership by celebrating and welcoming the new year peacefully.

Its 2021, let's be respectful to one and other and look after our communities so that we live harmoniously and prosper together. Let us not use regionalism and tribalism to cause disunity but rather use it to promote a loving, caring and peaceful society.

The future of our city, our country and our children depends entirely on the choices and decisions we make today. If you choose to throw rubbish pick them up, if you choose to consume alcohol take control of your drunkenness and if you choose to have children look after them. Take responsibility of your actions and dont blame anyone for your failures.

Evil prevails when good men do nothing.