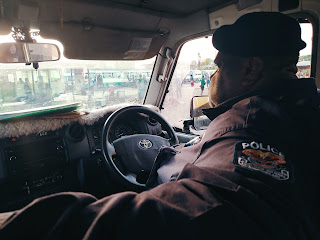 Being a law enforcement officer is not an easy task. Being a police officer is even tougher.

You become an enemy with the evil while trying to uphold the rule of law and keep the society in good order. For many justice is seen at the point of the rifle, but for a few the uniform and Queens crown symbolizes the rule of law.

Today I would like to share with you the challenges faced by one of Lae City's proactive police detachment - The Footbeat Unit.

Based out of Eriku, the Footbeat unit is headed by former Lae Police Task Force hardman David August. August enjoys his buai and pinpin (smoke) and his favorite whiskey with friends away from work but he's a tough bloke when it comes to policing duties.

Since 2016, David August has been in charge of enforcing the 19 laws of the Lae Urban Local Level Government (LULLG). From street vending to littering and loitering, this has been a tough task given Lae's growing urban drift from within Morobe and neighboring provinces.

There's been little or no support from the Lae City Council. An empty 20ft container office at Eriku without furnitures and office stationaries is where the Footbeat unit operates out from.

"For the last four years, we only had a skeleton office with a chair and a table," says August.

Despite that, they've been able to keep police records out from Bundi Camp and a small office space at the Lae Central police station.

"Enforcing LULLG laws is a massive task. We need all the backing and support that are required by authorities to enforce the laws."

Street vending is a major problem in Lae City. People who have lived on the fringes of the city have moved closer to Eriku, Top Town and Main Market.

People with disabilities have been used to sell buai and cigarettes for a small commission.

"There are officers within the LULLG that are approving licenses and permits for these people to operate at public areas."

"When we (police) want to remove them, they show us signed documents. How can we enforce the city laws when it's very own officers are approving such practices?"

Every afternoon the Footbeat unit ensure Eriku and Top Townbus stops are safe for commuters to move safely home. The other problem is the nuisance from side bus crews and their gang of loiterers who makes it a bit difficult for police to identify petty criminals.

"We go tough on them and that's the only way we keep them away from the bus stops and infront of shops."

In a bid to promote a healthy and safer community in partnership, David August wants the Lae City Authority (LCA) to make Eriku a no buai chewing area.

"My proposal to LCA will be to make Eriku a no buai chewing zone. That would be from Gurney street down Milfordhaven Road to Kwila Road, Bumbu Road and back up," says August.

If buai chewing can be controlled at a particular area like Eriku, there wont be littering, buai spittle and street vending of buai and cigarettes at Eriku.

"Our attitude is the problem. If we change our attitude to be better people, there wont be buai spittle and rubbish everywhere."

People can carry their buai but are not allowed to chew. They will be fined or charged under the LULLG Act. PMV drivers and crew will be charged if a passenger is caught chewing buai in the PMV.

"The LCA needs to work closely with us by giving orders to remove illegal markets, street vending and charge and fine those that dont comply with our city laws," added August.

The LCA has got a new police vehicle for them and will also be renovating their base at Eriku.

Kudos to a great team of policemen who worked tirelessly to keep our city safe and free from problems. Now as I've always say "Evil prevails when good men do nothing."